Stephen L. Mylett will be the new Chief of the Akron Police Department. Mylett was one of four finalists for the position following a nationwide search. The Long Island native most recently served as Chief in Bellevue, Washington and comes to the position with 32 years of experience.

The selection process included a community town hall and a community survey. “The community feedback we received reinforces that our community wants a Chief that understands Akron, prioritizes inclusive policing, and will develop effective strategies to reduce crime and violence in our city,” Mayor Horrigan said.

Mylett started out in the Air Force, then got into law enforcement in 1989. He first served as a member fo the Corpus Christi, Texas police department where he eventually reached Assistant Chief of Police in 2011. He then went to the City of Southlake, Texas to become their Chief of Police. In 2015 he became Chief in Bellevue.

Mylett graduated from Midwestern State University with a Bachelor of Applied Arts and Sciences. He has a Masters Degree in Criminal Justice Leadership and Management from Sam Houston State University.

“Steve is a demonstrated man of integrity, a successful leader of police personnel, and an engaged member of the communities he serves. Steve understands the challenges that Akron faces to reduce violent crime and increase community trust. I have confidence that he will quickly earn the respect of both the department and the citizens of Akron, and I look forward to introducing him to our community, and each of Akron’s welcoming and diverse neighborhoods.” Mayor Horrigan added.

As Chief of Police in Akron, Mylett will lead a department with an annual budget of $70 million and 447 total officers.

“I am honored at the opportunity to serve the Akron community and the officers of the APD as your next Chief of Police,” Chief Mylett said. “In the past month I have had the opportunity to visit this City and found Akron to be a welcoming community whose leaders truly care about those they have the privilege to serve. I am very happy to be joining the Akron team.”

Mylett’s base salary as Chief will be $144,788.80 per year. The city also authorized an additional $29,722.20 annual bonus in order to nationally recruit for the position. 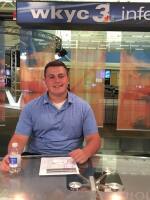 Cameron Miller
Cameron is a senior at Kent State University studying journalism, with minors in digital media production and athletic coaching. He was a part of Black Squirrel Radio last year where he co-hosted a sports talk show. He hopes to further his learning and become an audio/video editor at a news station after graduation.
See stories by Cameron Miller
More by this reporter