The Honesty for Ohio Education Coalition authored an open letter to DeWine, arguing several state board of education districts are invalid and the map does not provide clear urban representation, as governed by Ohio law.

The argument, according to the coalition’s Piet van Lier, is that Ohio code requires state board of education districts to “consist of the territory of three contiguous state senate districts.”

The new school board map was drawn based on the second Ohio senate map created by the Ohio Redistricting Commission. But when a federal three-judge panel put the third state senate map in place in May, that invalidated the school board map, van Lier said. And the group is calling on DeWine’s office to address the problem.

A spokesperson for DeWine’s office says the district lines cannot be changed after the January 31, 2022, deadline, but van Lier and his group say DeWine’s reading of the law is too narrow. They say the governor has until the end of January next year to make the changes.

The coalition also argues the governor’s map dilutes urban representation on the state school board for Cuyahoga and Franklin counties.

“You know, right now, Franklin County and Cuyahoga County have two of the three elected Black elected members of the school board,” van Lier said, “and it’s much less likely that urban families – Black and brown families – in Cleveland and Columbus will be truly represented in this new makeup of the state board.” 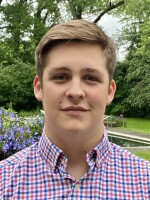 Theo Moll
A rising senior at University School in Hunting Valley, Theo works as an intern for Ideastream Public Media. At US, he serves as the co-editor in chief of the school newspaper, co-head of the organization responsible for broadcasting school sports, and prefect-elect of Hawley house.
See stories by Theo Moll