I want to shield my niece from the generational trauma of racism. Is that possible?

This past summer, I went to Florida to visit my family.

I was excited to see all of them, but the real star of the show was my brand new baby cousin, Iris.

She is talkative, curious and strikingly independent. My mom said I was just like her as a kid.

I was so happy to see my family and finally meet Iris, but my mom’s comment made me apprehensive. I didn't want my baby cousin to become like me in every way.

I didn't want her to struggle with mental illness like I did, or face the trauma and pain that I and the generations of strong Black women before me often did.

So, to protect Iris and soothe some of my fears, I decided to investigate the cycle of generational untreated mental illness in African American descendants of slavery. I hoped I could break this cycle and help save her from it.

First I reached out to Dr. Tyffani Dent. Dent, who is Black, describes herself as a "psychologist of the culture," because of how she works to resolve the unique mental health issues Black people face.

"We see how the world treats people who look like us and the responses that people say when we're harmed, which is justification for us being harmed," Dent told me. "It impacts who we are."

But Dent said the field of psychology doesn't recognize that racism itself can be trauma. That can delay healing, she said.

It’s not just professional researchers that see this missing link in psychology. It’s Black people everywhere, including my friends and classmates at Ohio State University, where the student body is only 25 percent non-white.

"There are many issues that go unnoticed and unrecognized and they affect a lot of the minorities," Katie said.

She pointed to insensitivity from peers, having to correct professors on their teachings of race and hearing non-Black people use the n-word.

Fortunately, Dent told me that there are many ways for people to seek help.

The idea of church being a healing space reminded me of my mom. She grew up in the same church that much of our family had attended.

I asked my mom about how the Black church shaped her values.

"Even the songs, it's like every song speaks to turning it over to Jesus and how he delivered you," she said.

She said those songs date from an era when many Black people felt a lack of empowerment in their own lives.

"When you're so focused on survival, you don't necessarily have the opportunity to address some of the underlying issues because you're trying to eat, you're trying to keep a roof over your head," she said.

Even as times changed and got incrementally better, she said there was an idea planted within Black communities that our resilience and faith alone should be enough to carry us through hardship. She said we have to reshape that mindset.

"Until you intentionally break the cycle, do something different, you can't make any changes," she said. "So I always wanted it to be something that we weren't ashamed of talking about and willing to confront."

My mom assured me that in confronting this reality, our reality, I was on the right path.

On the last day of my vacation, my parents and I babysat my cousin Iris. I held her on my lap and my dad spoon fed her mashed potatoes, grapes, mashed potatoes covered in grapes and whatever else she could grab with her chubby little fingers.

Looking back on those memories, I realize I may not be able to shield Iris from the difficult things that she may face in her future.

But what I can do is tell her it's safe to talk to me, that there's strength in our vulnerability and that speaking up is the first step in breaking this cycle. 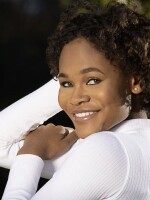 Kendal Harris
Kendal Harris is a Cleveland native and a sophomore at Ohio State University majoring in Public Management, Leadership, and Policy within the John Glenn College of Public Affairs and minoring in creative writing. She is a member of the Morrill Scholars Program in the Office of Diversity and Inclusion. Kendal is also an athlete on Ohio State's Equestrian Team and a member of the Center for Ethics and Human Values' Civil Discourse Fellowship.
See stories by Kendal Harris
Related Stories
Related Content