The Cuyahoga Valley Scenic Railroad is celebrating its 50th birthday this year.

The railroad was founded in 1972 by Siegfried Buerling, the original director of Hale Farm and Village in Bath.

He wanted to use the railroad to expand the farm as living history museum and awareness of it in Cleveland.

Katelyn Gainer
The origins of the CVSR

"The idea came about for the railroad was to connect people from Cleveland to Hale Farm and Village in the first run that they did was actually called the Choo-Choo Caper," according to Katelyn Gainer, a spokesperson for the railroad.

The CVSR plans a number of events this year to mark the 50th anniversary including its annual steam in the valley celebration featuring a working steam locomotive, a special exhibition at Hale Farm on the founding of the railroad and a gala in the fall. 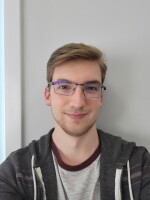 Ben Weaver
Ben Weaver is a Junior journalism student at Kent State University from Southwestern Ohio, in the Dayton area. Ben is pursuing a journalism major with a minor in photography. He is also working as a reporter at the Kent Stater.
See stories by Ben Weaver
More by this reporter