Disconnected Democracy
In a time of polarization, we’re asking Ohioans what matters and searching for what connects us.

Despite hardships, these Democrats in rural Ohio are committed to their community

Over the last couple decades, rural Ohio has turned into a reliably Republican part of the country, but there are a couple blue dots in that big red sea.

Take, for example, Shelly Hayes. She lived in Waterville, a small town in Northwest Ohio, as a “closet Democrat” from 1985 until 2007. She remembers those years fondly; her kids and her church community kept her busy. Then, one day, she met a bunch of other Democrats.

“I still remember that first experience of sitting in a room full of Democrats and I just remember getting chills,” she said. “I was just like oh my gosh, this is amazing to sit here and to talk with people and to talk freely.”

From then on, Hayes was more open about her politics. She volunteers on Democratic political campaigns, she’s a precinct captain, and she’s a co-founder of the Women’s Democratic Caucus of Rural Northwest Ohio.

Hayes said she’s tired of Democrats being maligned by Republicans and calling themselves the party of family values, “because evidently Democrats don’t have family values?”

She joked that she feels like she needs to decorate her front yard with “a cross, a tank, and a flag to say yes, I’m an American, I stand with my military and no you can’t claim Jesus because he belongs to everybody and he loves everybody and we do love our families!”

Hayes and her good friend Dorothy Singer founded the Women’s Democratic Caucus of Rural Northwest Ohio together after they both worked on the failed Congressional campaign of Democrat John Michael Galbraith. Singer lives in an even more rural part of the state, about seven miles outside of Defiance, an area that hasn’t voted for a Democratic presidential candidate since 1964 when Lyndon Johnson beat out Barry Goldwater.

The biggest event of the year in Defiance is the annual Halloween parade. Singer and the rest of the Defiance County Women’s Group dressed up as suffragettes and walked alongside a 1940 Ford truck.

They were having a great time until someone leaned into the microphone and yelled “Let’s Go Brandon!” That’s the shorthand slogan among some Republicans for an obscenity aimed at President Biden

Singer says that wasn’t all they heard that night.

“They started harassing us because we’re Democrats saying kind of nasty stuff to the women too, like just go home you should be barefoot and pregnant,” she said.

Incidents like that are, Singer said, pretty common. Pro-Trump and anti-Biden signs are a staple of the rural landscape, Singer said, but there was also the gas station down the street from her home that used to have “Let’s go Brandon” scrolled across its electronic sign. And there was also a pickup truck that used to drive around town waving a flag that featured an obscenity aimed at President Biden.

“The problem is gerrymandering. The problem is if you’re in such a foolproof, safe district you don’t have to listen to any of your constituents.”

“I’m wheeling my little granddaughter in her stroller and I was covering her little eyes, not that she can read but it’s the idea,” Singer said. “Why would you do that?”

People in her community feel comfortable acting that way because it’s understood that almost everyone is a Republican, she said. When she worked in an office, she never discussed politics with her colleagues. When she taught Sunday school at a Catholic church, one family took their daughters out of her classes. Democratic yard signs often get stolen - or slashed. As for running for office, Singer said Democrats don’t stand a chance.

“The ladder is greased if you’re a Republican,” she said. “I don’t know what the other metaphor would be but they’re gonna put little tacks on the road in front of your car if you’re a Democrat. I mean if you want to run for office here you’d have to be a Republican.”

But there are other Democrats out there. She and her husband Ed operate a letter writing campaign to the local paper and they’ll hear back from community members, albeit discretely.

“People come up quietly and whisper in our ear that they liked our letter,” she said.

There are also the folks that invite them in when they go canvassing or talk their ear off when they phone bank, relieved to finally hear from some fellow Democrats.

Ed Singer said he doesn’t mind. Finding new Democrats, convincing them to register and go out and vote are part of what keeps him motivated. A retired professor with a PhD in rural sociology, he cares deeply about the environment, issues around economic and social inequality, and good governance.

As for American political polarization, the kind that deeply divides neighbors and even families, he believes the fault is not with individual voters.

“I think the people who are responsible for the mess we have in terms of what we experience as polarization are our leaders who say lies and they do deliberately because they’re opportunists, “he said. “They want to get elected and it’s just a terrible irresponsibility on their part.”

The Singers don’t just write letters to the local paper. They also regularly write and call many of their local representatives, only they rarely hear back. Ed Singer said rural Democrats are so outnumbered, their representatives don’t have to pay attention to them.

“The problem is gerrymandering,’” he said. “The problem is if you’re in such a foolproof, safe district you don’t have to listen to any of your constituents.”

Despite the hardships that come with being a Democrat in rural Ohio, Dorothy Singer said she can’t imagine living anywhere else. She cares for her community, she appreciates the local arts scene, she dislikes city traffic and loves nature.

As for Ed, he is less attached to their rural community, but he “will live where Dorothy lives”.

Disconnected Democracy is a collaborative project of the Ohio Newsroom. We'd love to hear your thoughts on the project. Send us an email.

The Ohio Newsroom is a formal collaboration of Ohio’s network of public radio newsrooms that creates a sustainable model for statewide news coverage, including stories that may not have otherwise been told. 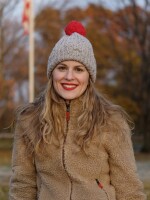 Ida Lieszkovszky
Ida Lieszkovszky is a freelance journalist based in Cleveland, Ohio. She covers an array of topics, including politics, education, and the environment. You can find her on Twitter @Ida_in_Cle.
See stories by Ida Lieszkovszky
Related Stories
More by this reporter