After the Bars: Music for Improv and TV Shows

David Schmoll had played in bands and in bars for years, and decided to give it up and get on with life. That's what coming to Kent State in the 1990s was supposed to initiate. And it might have, if he hadn't fallen in with a bunch of improvisational actors and become their musical director. Dean Amy Reynolds talks with David about how that led him from Cabaret Dada in Cleveland, to The Second City in Cleveland, to Boom Chicago in Amsterdam. That's where he worked with Amber Ruffin and began a long working relationship as her musical director. And he's doing his own music, too.
In the interview he talks about a representative sketch with Amber, here it is. 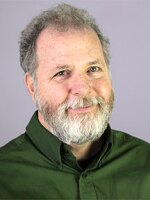 Joe Gunderman
After a degree in broadcasting and theater from BGSU, Joe’s professional radio world commenced in Archbold, Ohio, in 1979, where he was the overnight deejay. In 1980 he transitioned to one of Ohio’s original radio stations, WSPD in Toledo. There he became a bone fide, mulit-award winning production director, and began paying serious attention to voice. In 1984 he came back to his hometown of Cleveland and became a full-time freelance voice artist, doing work heard all over the country. It was during this time that he was hired as an actor once a month on the WKSU production, “Standing Rock Access,” which ran from 1984-85. The freelance voice work has continued for over 30 years now. In addition to the voice work, in 1986 Joe joined, as production director, the highly successful team at Lite Rock 106.5 WLTF-FM/WRMR-AM in Cleveland, which through ownership change became WLTF-FM/WWWE-AM in 1990.
See stories by Joe Gunderman
Related Stories
More by this reporter