Louisville Protests For Racial Justice Continue, Even As Others In U.S. Fade

George Floyd and Breonna Taylor were both killed by police officers. You hear both of their names invoked in anti-racism protests. The officers involved in George Floyd's death face criminal charges in Minnesota, but what happened in Breonna Taylor's case in Kentucky is still under investigation. Protesters in Louisville say, until they see movement, they'll keep protesting. Here's Ryan Van Velzer of member station WFPL.

RYAN VAN VELZER, BYLINE: While the protests for racial justice have faded in many cities around the country, in Louisville, Ky., they continue.

DEE GARRETT: I mean, I don't think a lot of people truly understand - all they've got to do is give Breonna Taylor justice.

VAN VELZER: That's Dee Garrett, a protester from Cincinnati who came to Louisville during recent protests.

VAN VELZER: Police shot and killed Taylor in March during an overnight raid. The person they were looking for was not at the apartment and had already been taken into custody elsewhere. When police broke open the door, Taylor's boyfriend Kenneth Walker fired a weapon, injuring one officer, and that's when police shot back, killing Taylor.

VAN VELZER: The mass demonstrations that began in May gave way to an occupy movement. Protesters meet daily at a park in downtown. There are nightly marches, car caravans and other acts of civil disobedience. Protesters blocked a bridge between Indiana and Kentucky, interrupted a ribbon-cutting and set up a banquet in the streets of a gentrified neighborhood. Louisville Metro Police have made more than 500 arrests so far. Shameka Parrish-Wright with the Kentucky Alliance Against Racist and Political Repression is one of the organizers who has occupied Jefferson Square Park since protests began.

SHAMEKA PARRISH-WRIGHT: We, first, immediately want to know that those officers immediately are fired and arrested and are prosecuted.

VAN VELZER: Protesters have derided Louisville Mayor Greg Fischer for not firing the three officers involved in Taylor's killing. LMPD did terminate one - officer Brett Hankison. He has appealed that decision. Fischer says that he did all he could before turning the investigation over to the Kentucky attorney general in May.

GREG FISCHER: People are assuming just because all of the officers were at the same scene that all the officers did the same thing. And, obviously, they all did different actions. So the actions that we could take, we took them.

VAN VELZER: State Rep. Attica Scott's district includes Louisville's West End, where many of the city's Black residents live. She herself was tear gassed in the first days of protests. Scott remains unsatisfied with city and state leadership and says it's up to residents to demand change.

ATTICA SCOTT: Because we have systems that were never designed for us as Black people. We're trying to operate and navigate in them. But it doesn't work.

VAN VELZER: In addition to wanting the officers fired, protesters are asking for systemic change from the attorney general's office to the judge who signed off on the search warrants and police use-of-force policies. Louisville's Metro Council has passed a law banning no-knock warrants. It also requires officers to wear body cameras during search warrants, which didn't happen in Taylor's case. Protesters say those are good first steps. Reece Chenault with Black Lives Matter Louisville says this is all about fighting for their children. Chenault has a 6-year-old son who, he says, allows him to see the future.

VAN VELZER: The FBI and the Kentucky attorney general continue separate investigations into Taylor's death. Whatever comes out of those, protesters say the fight for justice will continue. 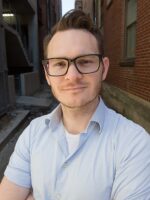 Ryan Van Velzer (KPR)
Ryan Van Velzer has told stories of people surviving floods in Thailand, record-breaking heat in Arizona and Hurricane Irma in South Florida. He has worked for The Arizona Republic, The Associated Press and The South Florida Sun Sentinel in addition to working as a travel reporter in Central America and Southeast Asia. Born and raised in Phoenix, Arizona, Ryan is happy to finally live in a city that has four seasons.